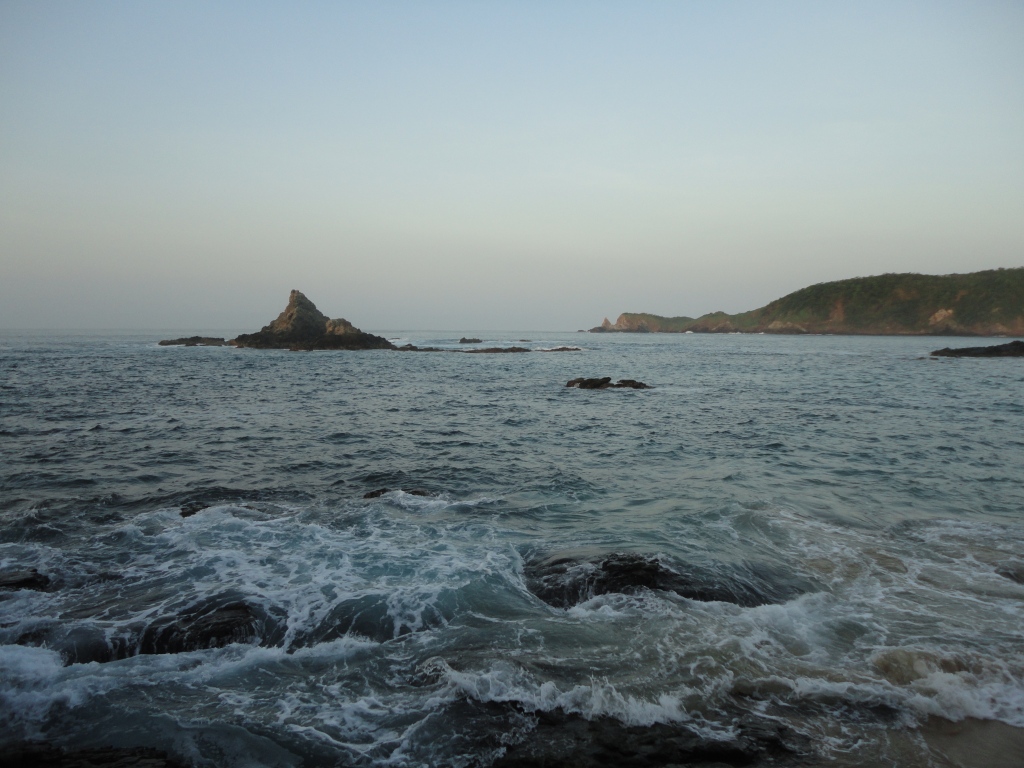 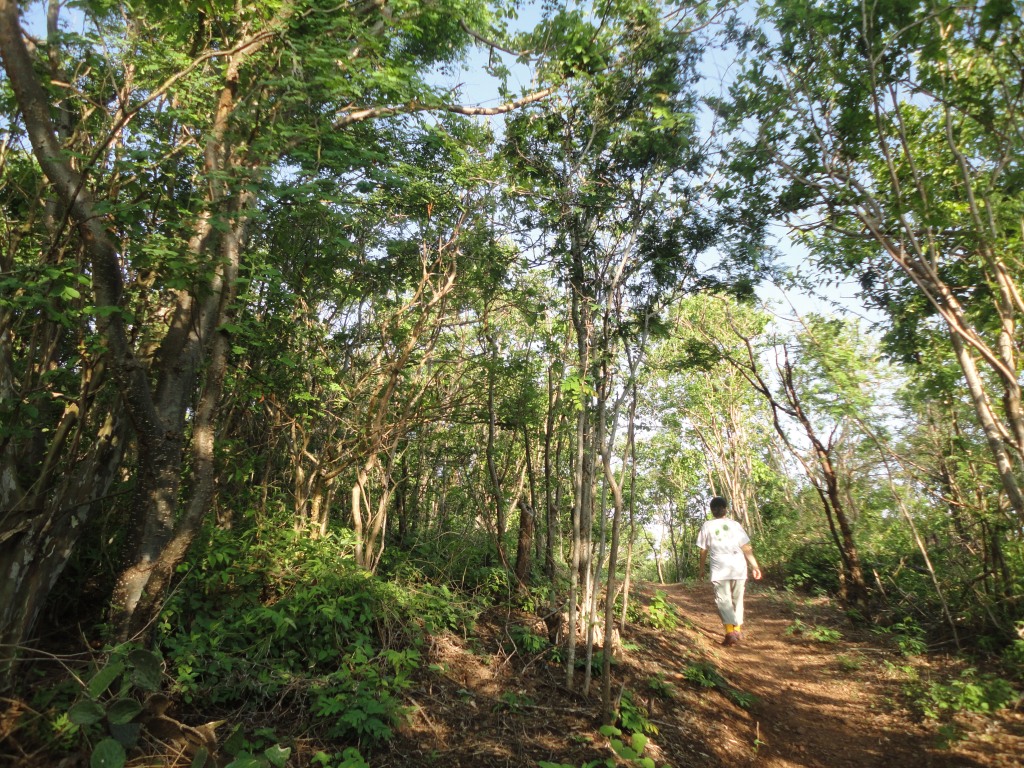 Since Mexico has no long distance rail system to speak of, an intricate system of automotive transit has evolved to carry travelers to destinations spread across the vast expanse of country. There’s an official tiered bus system and a slightly less official and certainly less expensive van, mini-bus, and pick-up truck system. Given Linda’s motion sickness, the repeated warnings of endless turn-filed roads, and our desire to travel overnight we opted for first-class bus tickets in order to cross the string of mountains that divide Oaxaca from the Pacific Ocean. We are, after all, calculated risk takers.

It was as uneventful as a nine-hour bus ride followed by a 35 minute taxi trip can be. Or at least is was for me. Poor Linda spent the first several hours battling her stomach with each 180 degree twist in the road.

We made it to our second major destination–Mazunte, a five-street (one paved) beach town– just before sunrise. With the world, or at least the town, save some very mellow stray dogs, deep in slumber, we wandered the shore, marveled at the crashing waves, and then caught a couple of hours of sleep in the shade before checking into our cabana, one block for the ocean.

The cabana is a small circle of concrete walls that meet a roof of thatched palm leaves at about your waist. The conical roof extends an additional fifteen feet, supported by some wooden beams and more than a few unfinished tree branches. From this solid structure is suspended a wooden platform with a mattress and a mosquito net. It’s not all that comfortable, but kind of perfect for Mazunte. (Remember these details later in story).

Mazunte is the kind of town you come to for a few days or forever. There isn’t really any middle ground here. There’s a entrenched hippie community, which includes the owner of our posada (how’s that for Spanish aptitude– it’s not really– posada just sounds much less crunchy than hostel), that follows a strict routine of coffee, waves, and maybe a little drumming and has melded with the fishing and turtle-hunting village that preceded their arrival. Together they maintain the place as peaceful, elegant, picturesque and isolated from just about everywhere. Linda calls it the “end of the world,” not in the apocryphal sense, but in the sense that it seems to be the farthest place on earth from all other places.

But we didn’t come to Mazunte for its beach, its elegance or its isolation. Or rather, if we had only wanted an isolated beach community there are half-a-dozen just in this part of the world that could have sufficed. Indeed, had we simply wanted a beach holiday there are places with fewer inconveniences and more beaches. No, we came to Mazunte for the turtles. Once sustained on turtle products, environmentalism has pushed the village to base its economy on conservation. The boats that once harvested sea turtles, now carry tourists on turtle-hunting site-seeing expeditions.

While we’ve forgone the boats, we made the Centro Mexicano de la Tortuga our first destination once our bearings had settled (see: some coffee, some waves, and a bit of napping). The “center” turned out to be little more than a well-worn open-air turtle zoo, but we did see turtles the size of Matchbox cars side-by-side with turtles the size of actual cars. Awesome, in the way the word was once defined.

Very shortly, we’ve fallen into our routine. We rotate between the mango frappes at the café that overlooks the beach and dips in the powerfully undertowed, but perfectly temperatured ocean. Last night we considered a hike to an overlook that promised a sensational sunset, but opted for a night of reading at the cabana instead.

Just as she came inside for the night, Linda, tired of the heat, and the dust and the mosquitoes, said “I hope it rains.”

The rain and its accompanying lightning came. It quickly moved us from mundane thoughts like “too bad we left the towels out,” to the awe that accompanies every powerful storm to abject terror as bolt after bolt struck ever so close by. We began to question the efficacy of the structure in which we were housed, the pointed roof of which, those of you reading along at home will remember, is made of woven palm leaves. Logic tells you that the locals deal with storms like this all the time and must have built our cabana with them in mind. Statistics tell you that the chances of something truly terrible happening are slim. But your imagination, spurred on the very real sensory effects of driving rain and constant lightning, tell you otherwise.

Calculated risk takers, indeed. What would happen if lightning struck the roof or a tree nearby?

It didn’t. But we’re left this morning feeling a sense of survival accomplishment, although we did little more than huddle under our mosquito netting and hope for the best.